Sia Ancient City was a town in ancient Pisidia, which may have been founded during the 2nd century BC. Foundations of houses and walls from this time remain today - at least those in the Hellenistic period. Houses had roofs designed to collect rainwater, which would funnel into a cistern on the ground level. 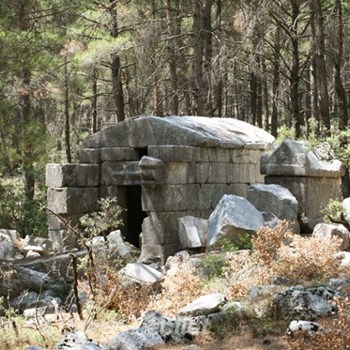 Sia was historically forgotten due to its secluded location. As the lack of passable roads made it difficult to travel and trade, most buildings were never modified or destroyed. The Via Sebaste, built and maintained in Roman times, disappeared completely from this part of Pisidia after the collapse of the Byzantine Empire. After this point only a small section over the Taurus remained until the Maximianupolis customs station.

From the Roman era, a Bouleuterion - three Roman temples and an agora with Doric stoa have been preserved. Ruins of two basilicas can be seen from the Byzantine era.