Selime Monastery is undoubtedly one of the most astonishing places to visit in Cappadocia region, given its size. The monastery is thought to have taken over 200 years to shape, and it can house as many as 5000 people at once. It was converted into a caravanserai after 11th century, and has lots of stables for camels. Selime Monastery is the biggest and most impressive monastery in Cappadocia dating back to the 8th or 9th century. 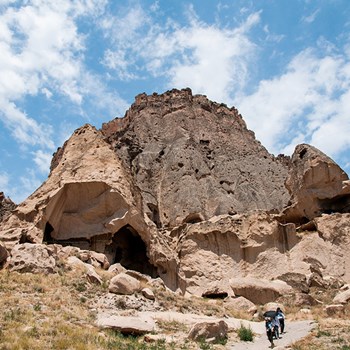 The caravanserais were hotels along the Silk Road where both merchants and their animals could stay together without any fees for three days. This system was started during the Seljuk Empire to improve the trade in Turkey and Silk Road was actively used until exploration by Christopher Columbus providing a new opportunity to travel through oceans in much less time. After 16th century, Seljuk Monastery has been abandoned that was formerly occupied by shepherds and children of village who unfortunately has caused significant damage.

Selime Monastery has a big kitchen with a chimney, water well, missionary school, lots of storage space, a church, a chapel and living quarters. The cathedral is the most important building in Selime Monastery because it contains two rows of columns that separate the church into three sections. Most of the paintings were destroyed by vandalism but there are still some remaining.