Selahaddin Eyyubi Mosque or Saint Johannes Prodromos Addai Church is located in the city center of Sanliurfa and it is one of the largest historical buildings in Sanliurfa. 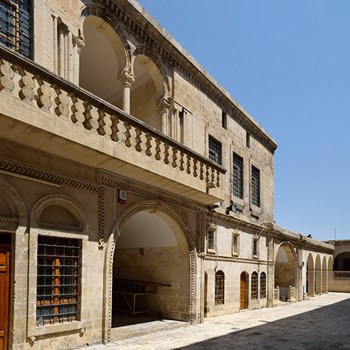 It is estimated that the church, which was also called a cathedral because it was the largest church in the region, was built in 19th century on the ruins of Church of St. John the Baptist, built by Bishop Nona in 457 AD. After being idle for a long time, it was renovated and opened as Muslim worship place in 1993.

The entrance of the mosque is in the west, and the last congregation place was built based on the narthex (entrance section) of a previous church. The building is illuminated by wide windows; it has half columns remaining from that first church and embossments of dragons entangled with each other.

AS Selahaddin Eyyubi used this as a mosque for some time, The mosque is called with his name.