Seben is a small town in the west of Blacksea region where the green unites with the blue. This is home to the Seben Rock Houses, an architectural and historic site which attracts tourists because of its unique architecture and memorable ambiance. The Rock Houses are 52 kilometers south of Bolu, worth visiting for its exclusive architecture and history.

Solaklar Rock houses, located about 4 kilometers from the Seben town center, is about 2 kilometers inland and 750 meters away from Solaklar village in the northeast. Three levels of rock houses are open to visitors at the moment. The ground floor is made up of a large, carved area that may have served as livestock shelter. Transportation is provided by an iron staircase and not the road that people created when they made this settlement. There are three rooms on the first floor. The second room has crosses on both walls with a Latin inscription on the cross.There are also small niches in the walls of the rooms. On this floor, all the rooms are on a corridor that has a rock wall overlooking the valley and window openings to its right. 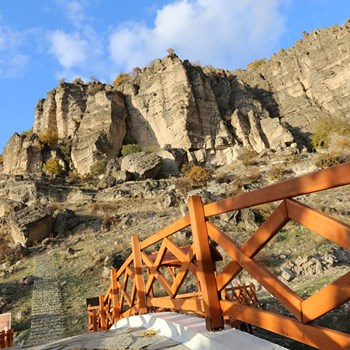 The second floor is accessed via a vertical chimney. This floor consists of a single room and on the left side of the chimney there is a well dug into the ground with a depth of one and half meters and diameter.

The third floor is accessed by a vertical chimney. This floor also consists of a single room, has an opening to hold water for agricultural purposes measuring 1.5x 15 meters directly opposite the window overlooking the valley. The water in this cistern is thought to have been carried by a canal carved from the window.

The fourth floor of the building is reached by a vertical chimney and this floor could be used for viewing the valley below. The ceiling height on this level is approximately 120 metres high and there's no other place for visitors to stand aside from looking at it through one corridor window which overlooks the valley.

Muslar Rock Houses are 7 km away from Seben Town, in a rocky area called Ulukayalar. These houses are most probably a Christian settlement, and there are five floors. The settlement has two wells, which could potentially be cisterns on top of the hill, as well as west of the rock settlement and also at a lower ground level.

There are entrances on the eastern slope of the valley where this settlement is located, some natural and others apparently man-made.The top of some fairy chimneys on either side of the valley is formed in a similar fashion to those found in Cappadocia. The rock houses were registered as a 1st Degree Archaeological and Natural Protected Area in 2009.