Sarihan CaravanseraiPlaces to Visit in Nevsehir

A beautiful building called Sarı Han, or Yellow Caravanserai, is found on the outskirts of Avanos and was built in 1249 with stones in a yellow color. The building has been renovated to its present appearance due to having undergone a thorough restoration work that started after 1991. This caravanserai attracts travelers visiting this region if they decide to participate in sema ceremony - the show where famous whirling dervishes play their dance according to old Turkish traditions.

The Seljuk sultans who ruled over the central regions of Asia Minor in the 12th and 13th centuries ordered construction on many caravanserais, along both the famous Silk Road as well as other important trade routes. The ruling dynasty compensated for merchants along these paths who were assaulted and robbed by ordering new constructions from state treasury funds. Foreign merchants got a discount customs duties with this type support. 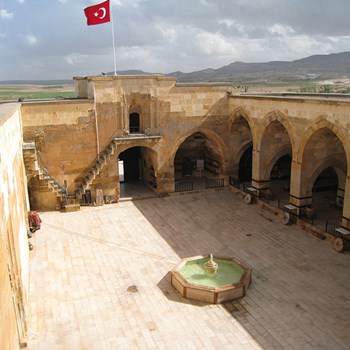 All of the visiting traveling merchants could use the caravanserais. The caravanserais provided free food and drinks for travelers first three days, as well medical care, help with pack animals for complications that may arise on their journeys. Each caravanserai employed an innkeeper to offer lodging services, a doctor to attend to medical emergencies, a veterinarian in case anything should happen with the animals being transported, cooks and imams.

Cappadocian caravanserais, located on the Silk Road, were built with volcanic rock and feature walls that are very high in order to protect against bandits’ attacks. Decorative elements of these buildings include door frames, which represent some of the finest examples of Seljuk stone sculpture remaining today. Their doors are made out of iron for protection from outside dangers like outlaws and thieves.

The Sarihan caravanserai has a small mosque located over the main gate. This architectural solution distinguishes Sarı Han from other buildings of this type because prayer quarters are usually placed in the middle of the courtyard, not overhead.

The 2000 square meter building is located in the center of a vast courtyard with six open rooms covered by vaulted arches. On the right side, roofed rooms are also scattered, each with its own intricately carved portal.

Opposite the entrance, there is a second portal, leading to a large domed room with sparse lighting. This space hosts performances of whirling dervishes.