Saratli Kirkgoz Underground City is a deep-rooted masterpiece, the secret treasure of Aksaray that has bewitched people with its unique historical tissue. It is located about 25 km far from the city center, close to the main road of Aksaray - Nevsehir.

The Saratlı Kirkgoz Underground City has 7 floors but only the top three have been open for visitors. There are 40 units altogether, which were used as residential units, toilets and food storage rooms by the ancient Greek residents. 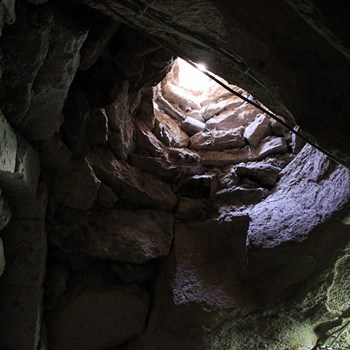 Like other underground cities in Cappadocia, Saratli Kirkgöz Underground City also served as shelter for the early Christians escaping the violent punishments of the Romans.

This city has a self-sustaining atmosphere, sometimes preventing residents from going outside for months. As the result of its security and well being in the long run, this city had its own bakery, water well and advanced ventilation system to ensure that it was always providing fresh air to its inhabitants.

Along with its use as a place of sanctuary and defence, researchers have found many tunnels connected to the peasants' homes that lead into the underground city. Doors on this entryway are 1.5 meters tall, about 200 kg each and are millstone-shaped; they were designed to be used against enemy attacks by shooting arrows through the holes in the middle of the doors as well as communicating messages about any problems from inside the city.