Santa Ruins is a historic site in the village of Dumanli, which is 80 kilometers from the Gümüşhane center. It's located on 3 hillsides by the Santa Yanbolu river and consists of 9 neighborhoods protected as a historical landmark. 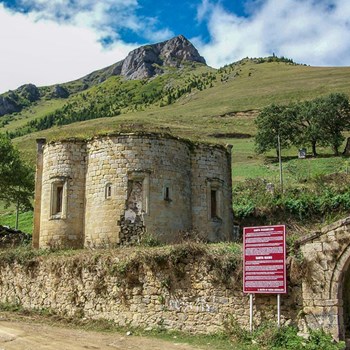 The Santa Ruins are amidst 9 neighborhoods and 300 houses. This region is rich in terms of its historical texture as it has been within the territory of the Ottoman Empire for many years. This archeological site attracts tourists' attention from around the area.

The professional blacksmiths and silversmiths in the region were largely recruited to work at mines, which led to a migration of Orthodox Christian (Greek) Ottoman citizens. When tax relief and other exemptions were granted for miners by the Ottoman Empire, there was an influx of skilled workers into the region. This migration and prosperity only lasted until the 18th and 19th centuries, when mines were closed and social and administrative problems arose.

The Santa region, a mining settlement from the 1500s to 1800s, was abandoned in 1923 as part of an agreement for population exchange.