Sanliurfa Archaeology and Mosaic MuseumPlaces to Visit in Sanliurfa

Şanlıurfa Archaeology and Mosaic Museum is a museum in Sanliurfa, Turkey. It contains remains of Şanlıurfa (known as Edessa in antiquity), Harran -- another ancient city which lies 27 kilometres southeast of Sanliurfa -- ruins found in the hydroelectric dam reservoirs at Atatürk Dam, Birecik Dam and Karkamis Dam.

With a closed area of 34,000 square metres (370,000 sq ft), it is one of Turkey's biggest museums. It consists of two sections - the mosaic section as well as the archaeology section to the south. In addition to exhibition halls there are offices, a museum lab, and a library along with restaurants and playgrounds for kids. 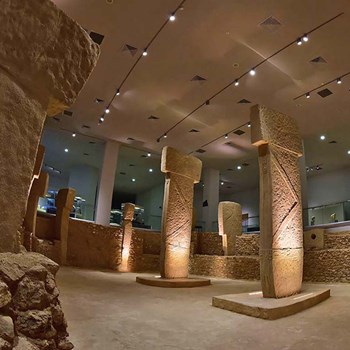 In the mosaic section, The mosaic of Orpheus and several other mosaics are exhibitied. The mosaic of Orpheus was created in 184 A.D. in Sanliurfa, and was later found there in 1980. It's now housed in the Şanlıurfa Museum but has been brought from the Dallas Museum of Art in 2015 which was taken there by illegal means.

The second and third halls are which contain exhibits from the Neolithic, Chalcolithic and Bronze eras including stone tools made of ceramics or metal; figurines representing gods; metallic implements such as axes or knives used in farming activities like bronze rings to tighten rope around containers.

One of the museum's most important artifacts is a 9500-year-old sculpture that is the oldest life-size human sculpture found to date. The ethnographic section features clothes, silver and bronze ornaments, crafts, doors with epitaphs (text written on them), examples of calligraphy and hand written Korans. Various archaeological items are also displayed in the yard.