Saint Theodore Church is located in Yeşilöz Village, about 10 kilometers southeast of Ürgüp. The church has the unique "Three Leaf Clover Plan" that sets it apart from other rock-cut churches in this region.

When you turn left following the entrance, you can reach the naos via the western exedra. The naos is made up of three semi-circles and sits in a square center, with a main apse being built higher than ground level in east side. Altar has to be placed on inner surface of main apse due to location of church. 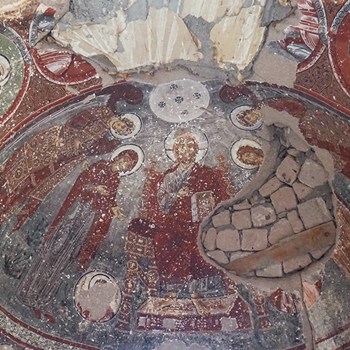 The Deesis scene is found on the main apse and the north-eastern exedra semi-domes of the building. In the Deesis scene in the main apse, Jesus makes a sign of blessing with his right hand while holding a book with crossed bars in his left hand. On his side are Mary to his right and John who sits next to her, as well as two angels: Michael dressed in imperial clothes and Gabriel wearing military attire. There are five stars on top of a round medallion that make up Jesus' halo. There are two bust-shaped figures on the medallions near Jesus' feet. The one on the left is largely destroyed, but that of the right and its inscription is partially preserved. The names Ioakim and Anna can be read next to the people in those images.

An image of Jesus that is depicted in the apse is a bust. He is holding one book in his left hand and making a blessing motion with his right while John the Baptist stands next to him on his right. On Jesus’ left, Mary points at him while gesturing with her hands and between their knees are two figures that appear as busts in round medallions. St. Julietta appears on both sides of the halo surrounding the figure next to John, who St. Kiryakos won next to the halo around the figure next to Mary

Multiple images of saints appear along with scenes from Jesus' life. There is a row of round icons on the lower roof, depicting 40 saints killed by Romans in AD 306; they are known as Martyrs of Sebaste. In the apse-arch (soffit), there are six Old Testament prophets, including Solomon and David. Saints Theodore and George can be seen at the bottom right side of the south wall.