Saint Polycarp Church is a Catholic church located in Konak district of İzmir. The patron saint of the church was Saint Polycarp. 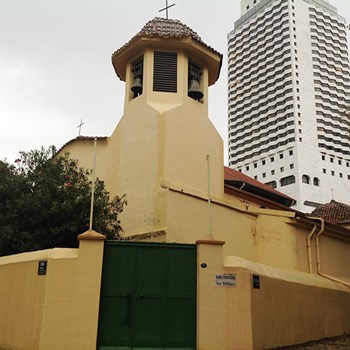 Saint Polycarp Church was built in 1625 with the permission of the Ottoman Sultan Suleiman I and at the request of the French King Louis XIII. The church building was damaged in a 1688 Smyrna earthquake, but it was repaired between 1690-1691. In 1763 the monastery accompanying it burned down, but rebuilt soon after.

The church was restored in 1775 with the contribution of French King Louis XVI and became a three-nave basilica. In 1820, a marble plaque was hung in the church in honor of Louis XIII. The church had chapels added during restoration from 1892–1989, decorated with frescoes depicting life of Polycarp made by architect Raymond Charles Péré. It was destroyed by fire at Smyrna and rebuilt in 1929.

The church is a rectangular basilica with three naves. It is located in the east-west direction and has an octagonal bell tower on the southwest side. The church is named in honor of the city's patron saint, Saint Polycarp, who was converted to Christianity by St John the Evangelist and became Bishop of Smyrna. He was burned at the stake by the Romans in AD 155 after refusing to renounce Christ and his feast day is observed on 26 January.