Saint Mercurius Underground City is located in Saratli village about 25 km far from the city center, close to the main road of Aksaray - Nevsehir.

There are seven levels in the underground city - three levels open for tourists to visit. The entrance is through a Seljuk period inn known as Develik among locals. Accessing other levels is through corridors and chambers, while all passageways lead to the church. There's usually one small-sized church in an underground city but in this one, the church is quite huge and accommodates graves for some children and adults. 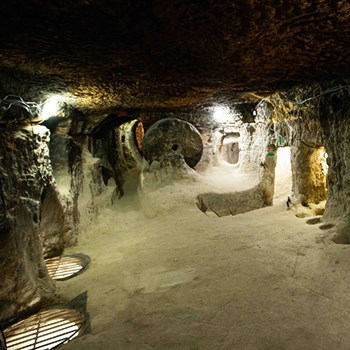 The underground city complex contains 3 water wells, storage rooms, a toilet, cellar and living quarters. It functioned as an early Christian practice ground around 250 AD when Christianity was outlawed by Romans and people were forced to believe in the Pagan religion of Romans.

Mercurius, a high-ranking military official by the name of Philopater, became recognized for his skills during service under Emperor Decius. Shortly after, he was given the title of general in the army. It is said that when Emperor Decius won a war against the Berber people, he wanted to show his gratitude to Pagan gods by offering them fumigants; it appears Mercurius objected and refused by saying: “I will pray only to my Lord and Savior Jesus Christ”.

Due to his disagreement with the emperor, the emperor got St. Mercurius sent away from the army. As Mercurius was a very respected and loved general in the Roman army, he was banished to Cappadocia. The Emperor Decius sent his man to the area where the underground city is located today, and got St. Mercurius executed by decapitation to take his revenge from Mercurius. It is thought that he lived in Cappadocia and his corpse was sent to Egypt after he died.

The church served as the site of worshipping since earlier periods, and graves are found inside. During excavations carried out in this area, it was found that around twenty graves belonging to children and adults were unearthed containing bones inside. One such grave contained skeletons of a male and female who were buried together.