Sahabiye Madrasa, which is square-shaped and has a large dome in the center, was built by its owner Ali. There is an open courtyard surrounding it and rooms on the either sides. The entrances have arched openings, two of which are large lecture halls. There are two small iwans on either side of Sahabiye Madrasa. One repairs were made to this building in the Republican period but during these renovations some architectural features where erased or damaged. 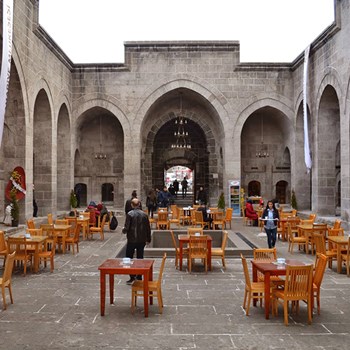 The grand portal of the Sahabiye Madrasa contains stone carvings that are impressive from both inside and outside. The Seljuk Vizier Sahib Ata Fahreddin Ali commissioned the madrasah to be built in 1267.

The Sahebiye Madrasah consists of 41 rooms with a rectangular plan, open courtyard and single-story. It’s related to Anatolian Seljuk architectural characteristics in appearance and is arranged around a central courtyard area of 40x30 meters. The crown gate which protrudes in mass is one example of the quality workmanship of Seljuks. Given that roads were higher outside the madrasa at that time, this low counterweight remained under it without becoming taller.