The Rüstem Paşa MosquePlaces to Visit in Istanbul

The Rüstem Paşa Mosque, designed by Mimar Sinan and completed in 1561 for Grand Vizier Rüstem Paşa, married to the daughter of the Sultan, Mihrimah and son-in-law to Suleiman the Magnificent, is located in Tahtakale.

This small mosque was built over vaulted shops in order to financially support the complex of mosque better, more visible component of the Istanbul skyline. Narrow, twisting interior flights of steps in the corners give access to a spacious courtyard. The double-porch roof is supported by rows of columns and its five domed bays project from them. 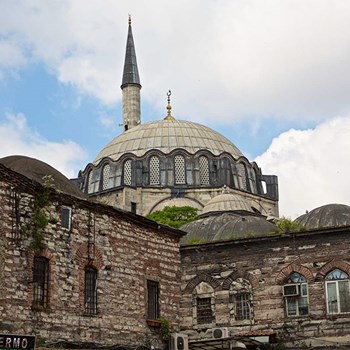 Although it is a true gem, the mosque does not get as many visitors as other areas. The small-sized masjid seems like a tiny showpiece for Ottoman architecture and ceramics, yet still has outstanding decoration inside.

The architect erected the mosque on a square platform. That could be one of the reasons why it tends to be overlooked. The central dome rests on arches supported by four mighty pillars and columns. Inside there are two staircases. At the top there is a terrace. The entire interior and part of the outer walls are adorned with valuable faience from that period, which mostly feature tulip motifs.In particular, the ornate faience decoration on the outer walls is unique to this mosque. The Grand Vizier identified with them and their wealth, because Iznik tiles were in their prime production and thus cost a great deal.

In the 1660 fire, the mosque suffered great damage. An earthquake in 1766 caused further harm to it. As a result of rebuilding and renovation, it was obvious to everyone that Mimar Sinan's minaret and dome had not been sufficiently maintained. The result is a historically important architectural landmark in Istanbul and among Sinan's other works.