Rüstem Pasha Caravanserai, also known as Taşhan, is located in Yakutiye district of Erzurum and was built by Ottoman statesman and grand vizier Rüstem Pasha. 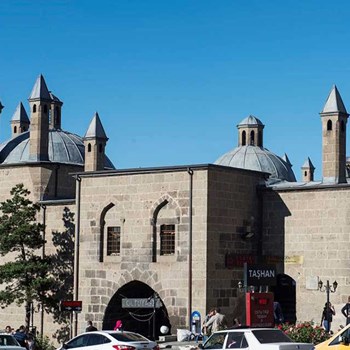 Rüstem Pasha Caravanserai is considered one of the masterworks of Ottoman architecture. The two-story ashlar building surrounds a rectangular courtyard with entrances in the west and east. Rooms are situated behind verandas facing the courtyard, with upper rooms flat-vaulted. Ornaments were added to this site later on. There are 32 rooms in the building.

The caravanserai underwent a major renovation in 1965 that added a slight supercumbent to the western facade of the building. The modification created an office room for the caravanserai manager, above the vaulted entrance on the western side.