RumkalePlaces to Visit in Sanliurfa

One of the most important places in Urfa is Rumkale, an ancient fort on the River Euphrates, about 50 km far from Sanliurfa city center.

Although the present structure is largely Hellenistic and Roman in origin, it was known to Assyrians before its construction. It is thought that John, one of the deciples of Jesus, lived at Rumkale during Roman times and contributed significantly to the subsequent conversion of Christianity. The site has been occupied by various Byzantine and Armenian warlords during the Middle Ages. It also became the seat of an Armenian bishop from 12th century. 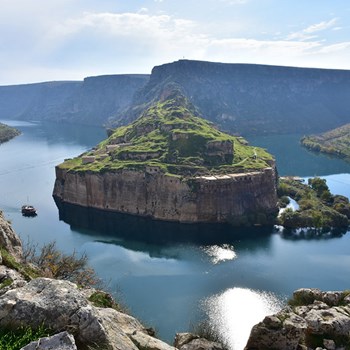 In 1179, a synod took place in the city of Rumkale that attempted to find a compromise between Greeks and Armenians. From 1203 to 1293 it was the religious center of Armenian Church, until its capture by Muslim Mamluks in 1293. After that, Ottomans controlled the region.

One of the most important historic places in Christianity, Rumkale possesses architectural ruins from both the Late Roman and Middle Age periods. The castle provides visitors with an area of 3500 m2 where they can find columns and bushes, Saint Nerses Church (1175), Barsavma Monastery (13th century), water cisterns, a spiral well and a ditch that has 8 meters width by 75 meters deep.

The importance and use of Rumkale in the 11th century was thanks to the story that during the Roman era, Johannes, one of Jesus' apostles resided there. This led to Johannes producing copies of Bibles in a room deep inside the rocks. Additionally during Nerses' time as poet saint when he gathered all ambassadors from across empire for a national movement to unite sectaries, Rumkale castle became a very important place.

A once prosperous city situated across a peninsula created by the reservoir of Birecik Dam and within the administrative boundaries of Şanlıurfa's Halfeti district, Rumkale is currently accessible by boat either from the neighboring site of Zeugma or from the town of Halfeti.