Rumeli FortressPlaces to Visit in Istanbul

Rumeli Castle is a fortress located on the shore of the Bosphorus Strait. It was built in 1452 by Ottoman sultan Mehmed II (also known as "Mehmed the Conqueror") for his planned invasion of Constantinople. It's just the opposite of Anadolu Castle (Anadolu Hisarı) - another Ottoman castle built in 1394 by Bayezid I. 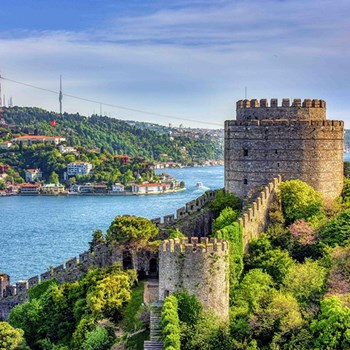 Both Anadolu Castle and Rumeli Castle were built by Ottoman sultans to prevent military and economic aid from coming into Byzantium via the Black Sea.

The Rumeli Castle is made up of three large towers, one small tower, and thirteen smaller towers which all are in very good condition.

After Constantinople fell, Rumelihisarı became a customs checkpoint. It was designated to control the passage of ships through the strait and eventually lost its strategic importance when fortresses were built further up the Bosphorus, where it meets with the Black Sea.

In the 17th century, Rumelihisarı acted as a prison primarily for foreigners captured in war. It was partially destroyed by an earthquake in 1509 but repaired soon after. The fortress was subsequently rebuilt and restored by Sultan Selim III (1761-1807). However, while it served as a residential neighborhood during the 19th century, it fell out of use in 19th century.