Rock Tomb-Houses of Evkaya are located on the surface of bedrock just south of Kastamonu city center. There are 8 rock-cut tombs in the area, including three monumental tombs, with two deathbeds each. For those who decide to visit the tombs there is a startling contrast in modern buildings towering above the ancient stone tombs. We are reminded of time and history as we contemplate our place in both. 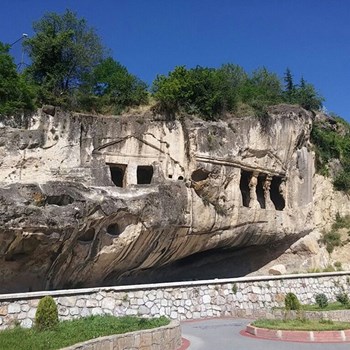 Particularly compelling is the Evkaya monument, after which the area is named. This tomb has a front structure with columns and reliefs of "Potnia Theron" – "The Mistress of Animals." The "potnia Theron" motif in ancient art is on display across the Mediterranean and Near East; figures often are depicted grasping two animals, suggesting a matriarchal deity. A widespread motif in ancient art, the Potnia Theron is found on many different types of images, from Greek to Egyptian. However, despite this common ground, the stories and associated meanings remain a mystery.

The tombs located here were built under Phrygian influence at the beginning of 7th Century BCE, conceived as open-air facilities rather than rock-pits.