Red Valley and Rose Valley are the most interesting valleys in Cappadocia, with Red Valley starting from Ortahisar Village's Panorama Point and ending in Cavusin Village. These can be hard to navigate as they are just joint each other. You'll see a lot of dwellings, vineyards, apricot and almond trees as you walk through the valleys.

There are trails of different lengths and difficulty-from the easiest to the hardest, some of which can take as little as 45 minutes. The best and longest trail takes about 4 hours and brings you to all the hidden churches. One of these churches is Uzumlu Church from 9th century; even though few frescoes remain on its walls, it's still worth visiting. 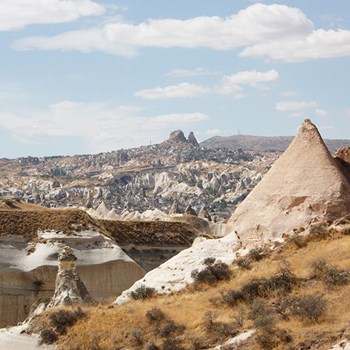 One of the most interesting churches in these mountains is Kolonlu Church, which is entered via a tunnel at the back and through a pigeon loft. The Romans controlled the region in 17AD and forced everyone to believe in Paganism. At the end of 1st century, Christians made up a large part of inhabitants in the region and as Paganism was Roman's official religion, people had to go deep into the valleys to avoid persecution and pray. Kolonlu Church is one of those hidden churches. It looks like a pigeon's nest from outside but when you enter inside you find a huge church behind the tunnel with columns in it.

The other church is called the Hacli (Cross) Church. It is a cross shaped church from the 11th century that has some very nice frescoes depicting Christ and Lady of Mercy inside. A nice big cross with marks from its origins decorates the ceiling too, which contributes to this church's name: The Cross Church.

The hike through Red and Rose Valleys is highly recommended to do it with a tour guide who knows the way, so that you don't miss out on any of the details.