The ram-shaped tombstones in the Tunceli province are located in several village cemeteries and bear witness to traditions of the ancient Turkmen Akkoyunlu tribal empire. The old tombs, located in villages throughout the region, serve not only as markers but also display their traditional religious and mythological elements as well as more customs and traditions.

The ram-sheep tombstones in Tunceli are generally standing. Variations of animals and plants, as well as relief figures belonging to items such as swords, knives, quivers, shields, daggers, looms, skewer sticks and forks are often found on the plain statues. 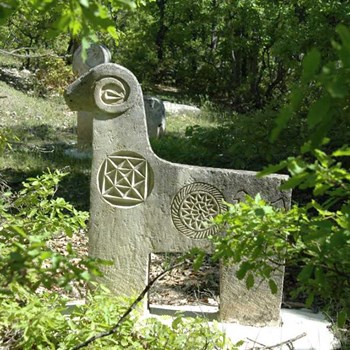 These figures are not only ornaments, but also indicate the gender, social position and profession of the person buried there. Different figures like swords, shields, horses, arrows, rams, rifles, pistols and knives show that the grave owner is man and demonstrates his valor.

Some symbols such as the oil lamp or scale shape to clergy whereas other figures like needle, handle and hand belong to women. Religious objects can also be identified in some tombs where the Zulfikar sword belonging to Hazrat Ali is featured alongside a sun disc, signifying an interred believer.

There are eleven ram statues in the cemetery of Sağlamtaş Village in the Pülümür District. Dated to 250-300 years ago and weighing 200-300 kg each, these were positioned on both sides of tombstones.