The Rákoczi House in Tekirdağ, Turkey is a historic 18th century house related to the life of Hungarian national hero Francis II Rákóczi. The house was donated to the Hungarian State in 1982 and turned into a national museum, attracting many visitors from around Hungary.

Ferenc II. Rákóczi was a Hungarian noble, wealthiest landlord in the Kingdom of Hungary and Prince of Transylvania who led the first uprising against Austrian repression between 1703-1711. After failing, he was forced into exile and lived for a time in Poland, Britain, and France. When the opportunity to live in Gallipoli came up with Sultan Ahmed III so he took it. After living there for 3 years, he moved on to Edirne and Istanbul before settling down in Tekirdağ where he died in 1735. 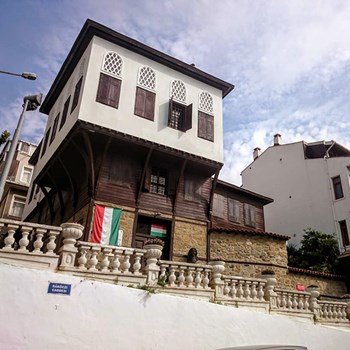 The building is an 18th-century wooden house in the typical Ottoman architectural style, with ten rooms on three levels. It sits atop a small hill and overlooks the Sea of Marmara. Before construction of the coastal highway around 1960, it was closer to the sea.

There is a bronze bust of Rákóczi on the ground floor and of his chamberlain Kelemen Mikes at the basement. Oil painted portraits, including those of his mother Ilona Zrínyi, stepfather Imre Thököly and aides decorate the walls. A banner with his family coat-of-arms is on display in one room. In another there's an oriental toilet; in yet another a kitchen, pantry shelves and well.

The finest room in the house is a reception area upstairs. This space was designed after the prince saw one during his stay in Edirne, and he liked it enough to have this version constructed. The ceiling of the room has floral and fruit-shaped adornments on metal stretches that run across wooden beams. The windows are made with stained glass that filter light beautifully through their colors.

The walls feature Hungarian folk motifs, and the floor displays a wooden chair made by Rákóczi himself. There is also an office of Kelemen Mikes on this floor where he wrote Letters from Turkey to his fictional aunt.