The ancient city of Prusias ad Hypium, located in the Konuralp District of Düzce makes its first appearance on the stage of history under the name Hypios. It was established on a hill that ends in the plain and stretches from east to west, with the name Kieros coming about after it started to be called by that title.

The Bithynians, who took action against the Mariandyns and Herekleia State, captured Kieros in the east of Sangarios by the hand of their king Prusias I. Prusias I, who placed a substation here and made it more prosperous than before, decorated the city with many monuments and changed its name after it was fortified. Thus, Kieros withdrew from the stage of history at the end of the 2nd century BC and became "Prusias". 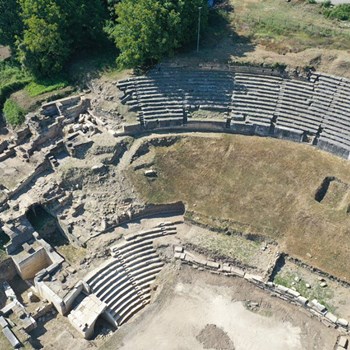 The Ancient Theater was built during the Hellenistic Age (300-30 BC) in the city, which it is known as the Forty Steps among locals. Additions belonging to Roman Period (30 BC-300 AD) have survived in ancient theater’s backstage wall and seating on second floor.

The Kemerkasim Aqueducts; eleven retaining legs from the old water system of the city have survived to the present day. The aqueduct, which is thought to carry water channels over it, was built with rubble stone.

The horse gate is the main entrance into Prusias ad Hypium ancient city. It was built in various renovations with reused materials, but a limestone lintel depicts a horse and Greek inscription.

The Roman Bridge is a series of arches built during the time when Rome was at its height. The bridge’s current dimensions are 4.80 meters by 30.25 meters long and 3.17 meters high, but it originally spanned a wider area--4.8-meters wide by 39.2-meter-long with a height of 3.17 meter–using only white marble blocks without any mortar to secure them together in place

Western Walls; it is 4.70m tall and 118m long. The entrance blocks were made from spolia during repair work in the Eastern Roman Empire period.

The Konuralp Museum, which was established to preserve the rich cultural heritage of the Prusias ad Hypium Ancient City, opened its doors to visitors in 2003. The museum consists of 3 exhibition halls, 1 laboratory, 2 warehouses, 1 conference hall and administrative sections. There are a total 6237 artifacts in the museum: 1848 archaeological artifacts 491 ethnographic artifacts and 3898 coins.