Pompeiopolis, an ancient city located in the center of Taşköprü District of Kastamonu Province, was established by the Romans in 64 BC as Paphlagonia's capital. Some architectural fragments can be seen here from Pompeiopolis, and artifacts unearthed during archaeological excavations are now on display at Kastamonu Museum. 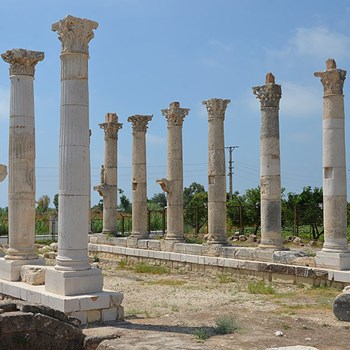 Excavations are still being done in the ancient city of Pompeiopolis, which is described by experts and archaeologists as being a close replica of Ephesus and Gaziantep Zeugma. During these forthcoming studies, it's been traced back to the Roman period and the oldest historical ruins were reached.

Pompeiopolis is a settlement in the north of Kastamonu, 25 km to Taşköprü. Located on the higher hill Zımbıllı and with its boundaries running south to Ilgaz Mountain and in-land eastward to Pınarbaşı valley. Pompeiopolis was founded by Pompeius in 65/64 BCE as a city-state on the east-west road crossing of the Amnias valley. It took its name from Pompeius and means "city of Pompeius". The region of Paphlagonia was connected to the Roman province of Galatia after the death of Deiotanos Philadephos, who was the last king of Paphlagonia in 6-5 BC. Pompeiopolis developed as a Roman city during this period and became capital due to its position as a meeting place.

Pompeiopolis became an episcopical center in the middle of the 6th century AD and then lost importance. During excavations carried out by the Kastamonu museum, many ornate mosaic floors were found, though there are few physical remains of the city.