Yalvaç is a major center of antiquity, as it stands next to the ancient city that has been the capital of Pisidia. During previous centuries, this area was known as Pisidia Antiokheia. The Pisidia Antiokheia antique city is about a kilometer from Yalvac town of Isparta province. Excavations at the ancient city of Pisidia were requested by Atatürk and a significant part emerged from the ground after the excavation was conducted.

In the year 39 or 36 BC, Antiokia was established and controlled by either Seleukos 1st or his son Antiokhos. The city was then included in Galatia state when Amyntas took power. Antiokheia became a Roman colony in 25 BC or some time later, and the city protected this status for more than two hundred years. 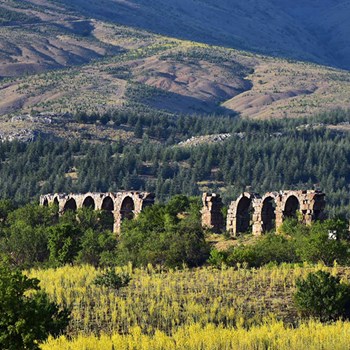 Antiokheia has been the metropolis of Pisidia, an elevated state established in the 3rd century AD that is best known for its role as a bishopric. In 713 AD, the city was subject to the invasion of Arabs and it had been destroyed.

The city was built on a high hill and surrounded with an oval-shaped wall. Current measurements indicate a length of 2920 meters. The dimensions of the wall vary by terrain slope so upslope sections average 1.50 meters in thickness while those flatter are 4.75 - 5 m thick.

The most magnificent door of the city was located in the west of the city. It is in the form of a three-opening passage, having two side pylons and two mid pylons. The body dimensions of the legs carrying the vaults are 3.2 x 2.36 meters and bases of these legs are limited with moldings and constructed simply and smoothly. It is understood that there were plasters, ornamented with plant motifs on both sides of those pillars which had 4 meter openings at bottom level on its surface (base).

Augustus Temple was constructed in the holy area at the highest location of the city after Emperor Augustus' death.The base of the building is formed by cutting the rock that originally existed. The temple on a platform, with a height of 2.50 m, was reached with 12 steps from below and connected to another surface which at lower level had an area of 5.65 x 7.90 m and depth of two meters deep carved out of the natural rock; probably vowing goods used during ceremonies. In front of the old temle there is an avenue having a measure of 63 x 85 meters. On each side of the avenue are two rows of pillars measuring 5 meters wide, which can still be seen today.

Saint Paul Church is the largest church in Antiokheia and is about 200 meters south of the city walls. As known, St. Paul had given its first sermon with Barnabas at a Synagogue located under this church for the sake of Christianity to spread. The church, which is devoted to Saint Paul for this reason, is very important.