Pepouza or Pepuza ancient city is located in Karahalli town of Usak Province and it was originally a Phrygian anciet city.

Between the middle of the 2nd century and 6th century, Pepuza was a headquarters for one of the ancient Christian churches, Montanism. Montanists believed that heavenly Jerusalem would descend to earth at Pepouza and Tymion. This church spread throughout Roman territories and reached far along with visitors from all over the empire. 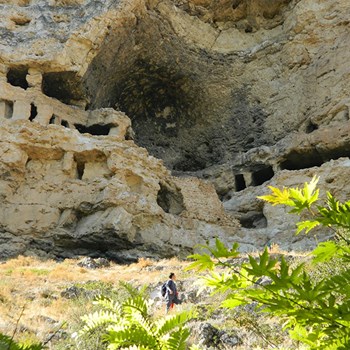 Women were very emancipated in this part of the church, becoming priests and also bishops of Montanism. This stemmed from its origins as a 2nd century CE Christian movement started by someone claiming to be a prophet named Montanus (but not Saint Montanus). However it eventually became extinct towards end of he 6th century.

The University of Heidelberg’s Peter Lampe and William Tabbernee of Tulsa have coordinated annual archaeological campaigns in Phrygia, Turkey since 2001. They discovered numerous ancient settlements during these missions and documented them while looking for the holy centers of Montanism, Pepuza and Tymion. Searching scholars had been working on finding these lost sites since the 19th century.

The ancient settlement in the Karahallı area, near the village of Karayakuplu, which was discovered and identified as Pepouza by William Tabbernee and Peter Lampe, existed continuously from Hellenistic times to Byzantine times. There was also an important rock-cut monastery in Byzantine times that belonged to the town.

Montanism is one of the lost sects that was mentioned in ancient texts but whose traces can no longer be found. The biggest difference concerning Montanus's sect, influenced by Cybele, mother goddess cult, was the emphasis it placed on gender equality between men and women .

He gave women the opportunity to become religious scholars, and two of its three founders are women. New marriages are not allowed after divorce or the death of their spouse, meaning monogamy always triumphs in Montanist life.

According to Montanus, the task of representing God—who appeared to people in Jesus Christ's person during His time on earth—passed or transferred directly to him after his crucifixion. He claimed that he himself, in a trance state, was speaking for God and preaching and predicting what God wanted humankind to know/notice.