The Payas Castle, which is unusual in comparison to most Turkish castles and was built by the Genoese, was given to the Knights Templar. A few centuries after they disappeared, it came under Ottoman control. The Ottomans rebuilt it during their construction of the Caravanserai in 1500’s. 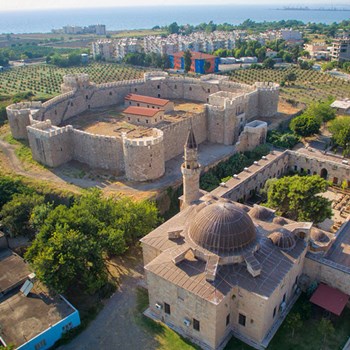 The second and largest part of this complex is the Sokullu Mehmet Pasha Caravanserai, a large inn designed to serve travellers. The caravanserai was built in 1574 by Mimar Sinan for Sokullu Mehmet Pasha at the strategic point where trade routes divert from the Hajj road to Mecca. It can house travellers and their goods as well as provide a place to wash, worship and do business with other people who have travelled.

The mosque, referred to as the Sarı Selim Mosque, is a small building mentioned in travel journals by Evliya Chelebi, the famous Ottoman traveller. The massive 350-year-old olive tree that sits in the courtyard of this mosque cannot be missed.

A little way outside the city walls from Payas Castle and the caravanserai is a fortress known as Demon Tower (Cin Kule). It was built three years after Sokullu Mehmet Pasha Caravanserai to protect the harbour which became the site of a new Ottoman shipyard used to begin an invasion on Cyprus. Today, it has lost some of its old charm but has been restored and turned into a tiny café.