Parion is an ancient village found in the land of Kemer, Biga District of Çanakkale Province. One theory on its name’s origin, based on assumptions that the city arose around 709 BC, emanates from Parion son of Iason or Demetria from Erythrai or Paris Prince of Troy.

In 546 BC, Parion became a Greek city under Persian rule. In 334 BC, when Alexander the Great invaded Asia Minor, Parion came into his sovereignty. 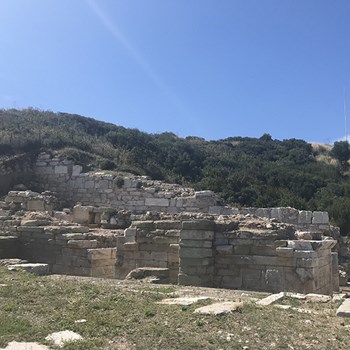 The theatre, odeion and baths of the city can be accepted as the solid proofs of this situation. Parion, which became a city inhabited by Christians starting from 5th century AD is understood to be an important Bishopric centre of Byzantine Period because of the presence various priests who were sent here. An important detail related to Christianity period in city is that it became the Archbishopric Centre at time Emperor Constantine Porphyrogennetos (911-959 AD).

Archaeological surveys, excavation, and restoration of Parion Ancient City have been undertaken by teams led by Professor Dr. Cevat Başaran in Athe years 1997, 1999 and 2002; professor Dr. Vedat Keleş from the Archeology Department of the Ondokuz Mayıs University starting from 2015.

Archaeological work within Parion Ancient city was first commenced with systematic excavations in 2005 under the directorship of Professor Dr. Cevat Başaran but since 2015 it has been continued under direction of Professor Dr. Vedat Keleş.

Excavations of Parion, a city in Turkey, have revealed much about the way social life was conducted and the public realm. Excavations are still underway which will eventually give many mounds roundabout to be documented by archaeologists as well as cultural artifacts.