Oylum Höyük is a mound about 7 kilometers from Kilis. It is located in the east southeast of the town of Oylum. Oylum Höyük is located on the Euphrates Valley-Amik Plain, approximately east-west approaches.

Oylum Höyük measures 460 meters by 320 meters, with a height of 22 meters to the north and 37 meters to the south. It is connected through a neck between two hills. 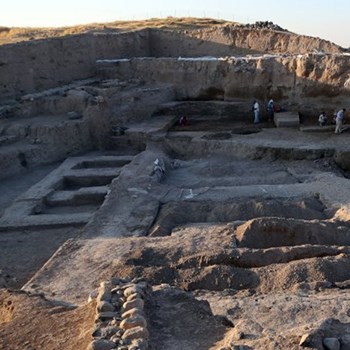 The settlement was inhabited from the Chalcolithic Age (Obeid Culture) to the Hellenistic Period. The Roman period is observed with pottery on the southern slopes. Excavations to date in this mound, whose main soil has not been reached yet, give a strong appearance of an important settlement in the Bronze and Iron Ages.

Analysis of archaeological artifacts dating back to the Chalcolithic Age has determined that grain was the staple food and barley, broad beans, lentils, figs and grapes were also regularly consumed.

Excavations at the Hellenistic Period building level uncovered a large stone building constructed from large blocks of stone and containing copper, silver, and bronze coins--many dating to the 1st millennium BC. Cylindrical seal reliefs depicting a man in dress reaching his ankles (known as Neo-Assyrian seal embroidery) were also found.

Votive objects were found during the studies conducted in 2007-2009 about the northern elevation. These findings from the Middle Bronze Age II are a bronze god with a copper ax and bronze figurines of a couple. All these items were placed under the foundation and base of the construction, and they served to ensure that divine favor was granted to this building.

One of the largest mounds in Anatolia, Oylum Höyük is also regarded as a royal center. Previously studied by archaeologists from Cumhuriyet University's Faculty of Arts and Sciences, Head of Archeology Department Assist. Assoc. Dr. Atilla Engin said this year they reached important findings that strengthen their belief that it was once considered the kingdom's capital city.