Erzurum CastlePlaces to Visit in Erzurum

The Oshki Oskvank Monastery, from the latter half of the 10th century, is located in present-day Erzurum province's Çamlıyamaç village. It was founded in the historic province of Tao (now part of northern Turkey). The main church, dedicated to St John the Baptist, was erected between 963 and 973.

During the Middle Ages, Oshki Monastery was a major center of Georgian literature and enlightenment. The monastery is regarded as "one of the most massive and architecturally sophisticated structures produced anywhere in the Eastern Christian world." The Grand duke/King Bagrat II of Tao and David III of Tao sponsored the construction of the monastery at Oshki. 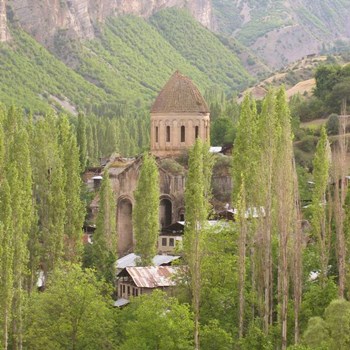 The blind arches are an essential element of the overall design. Along the eastern, southern, and northern sides of the church in Oshki, they extend over the outside walls. It's a great example of decorative blind arches on facades used in early periods. They run parallel to the architectural rhythm throughout most of the façade. The facade is largely adorned with bas-reliefs in the center.

On the southern facade of the church, which is the main facade, bas-reliefs with high reliefs are put in the center position above the central arch. They stand out from the flat surface. The eagle with a beast in his talons most likely signifies victory, and the sculptural wholething represents the triumph of heavenly forces embodied by archangels Michael and Gabriel.

The Bagrationi dynasty ruled the province of Tao. The rulership of the Bagrationi family was hereditary, and their members were known as Bagrat eristavi and David magistros. They represent heavenly powers who are the family's patrons. The figures are well proportioned, elegant in contour and form.

The static postures of previous donor portraits give way to free movement, and an equal desire may be seen in the close three-dimensional renderings of the archangels and deesis on the southern facade's near side, as well as a column in the southern gallery.

The low reliefs used in the Oshki church's elaborate decoration are also characteristic of the so-called transitional period in Georgian art (8th - 10th centuries), when old ways had not yet completely disappeared while new methods were emerging. It must have taken sculptors from different generations to complete it. The Oshki church already exhibits characteristics that would eventually emerge in the 11th century.