Nigde MuseumPlaces to Visit in Nigde

Nigde Museum is located in the center of the city and it has one of the largest collections of Middle Anatolia.

The museum's objects are displayed in chronological order: Room 1 features prehistoric finds, including Stone Age artifacts like obsidian spear points and arrowheads. They come from Golludag, Kosk Hoyuk, Pınarbasi, Kaletepe, some other sites and date back to the 12th millennium BC. There is a reconstruction of a house from Kosk Hoyuk dating back to the sixth and fifth millennia BC in this section. Objects found at these sites include pottery that dates to the 6th and 5th millennia BC. 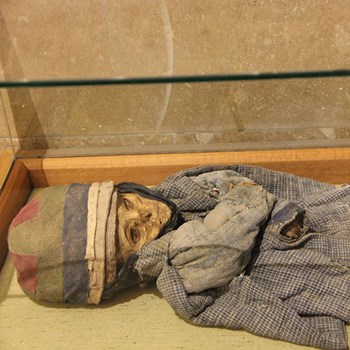 This room contains objects from the Bronze Age, of which are also from time of Assyrian trade colonies (Karum). The objects come from the excavations at Acemhöyük and prehistoric tin mines near Kestel.

In Room 2, there are steles and other objects from the Neo-Hittite/Luwian and Phrygian time periods. One noteworthy object is the Niğde Stele which was found near the Citadel of Niğde (de). It depicts a weather god and was dedicated to Warpalawas, King of Tuwana in 8th century BC by his son Muwaharanis.

There is a plaster cast of the Andaval Stele, which also mentions Warpalawas and was found reused in the floor of a Byzantine church at Andaval (modern Aktaş) to the northeast of Niğde. Another stele from this period was found at Keşlik, about 30 km west of Niğde, near Altunhisar. It shows the weather god in a similar way to the Stele of Niğde, but its inscription is no longer legible.The archeological find of the Phrygian period consists of artifacts from Porsuk, Tepebağları, Kaynarca, Kemerhisar and Niğde citadel.

Room 4 contains artifacts from the Graeco-Roman period, mostly from Tyana. Among these are inscriptions, statues, reliefs, a sarcophagus, small finds and pottery. At the entrance to Room 5 is a smaller room with coins from the Hellenistic, Roman Byzantine and Islamic periods. In Room 5 itself there are mummies of a woman and four children which date back to 10th century AD in early Christian church located in Ihlara Valley.Room 6 has ethnographic display containing books carpets weapons and traditional costumes.