The Mucur Underground City is a series of tunnels carved into the ground. Estimates put its size at about 7-8 metres (23 ft) below ground level, extending to near Kırşehir Hakan Paşa Tomb. 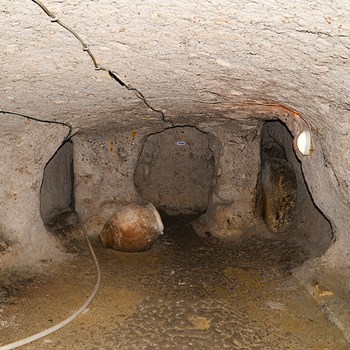 During the Roman period, Christianity spread rapidly in the 2nd century AD and there was a great struggle taking place between pagans and Christians over where they would worship. Underground cities emerged in order to shelter members of the Christian faith from external threats as well as provide environments for them to worship without fear.

The Mucur Underground City is vast with its many rooms, hallways and corridors that have been cleaned to date. In the underground city there are passages used solely as doorways which people can walk through only by bending down.

A comparative study was conducted in 2015 on the landscaping work to Mucur Underground City. The results included surveying and measuring that demonstrated its dimensions are expected to be comparable with human-sized passageways, reception rooms (mostly as large as small animals can fit), and ventilation chimneys above ground.