Mount Spil National Park is known for its historical and mythological points, as well as a vast diversity of flora and fauna. The park's canyons, caves and steep valleys are a result of cavernous formations. The main tree species in the area include pine, juniper, poplar, walnut, elm and oak; 20 have been determined by scientific research to be endangered.

Mount Spil National Park has plenty of treasures to explore, including the Manisa tulips for which it is named. It is home to many wildlife species - bears, roe deer, foxes, vultures and eagles - as well as a pheasant production farm. 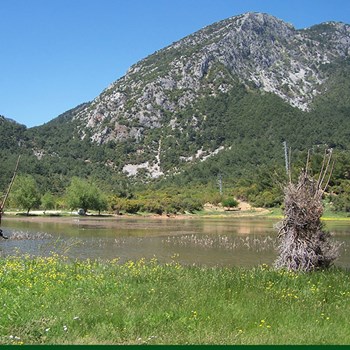 The history of the mountain has multiple versions. One account states that the mountain was named after Cybele, the wife of god Cronos. There is a relief carved into the rocks in Akpinar with her image on it. Another version states that spilos, daughter of Friesian king Menos and sister to Tantalos, was kidnapped and left here by wild animals where she lived until growing up. Tantalos built a palace here which he later sacrificed his son to the Gods for prosperity before being punished.

The area known as Aglayan Kayalar (Crying Rock) was renamed because Niobe was crying for her 14 children killed by Leto. The caves in Dulkadin had been used as shelters, and some of the remains from this period are exhibited in Manisa Museum. The location is suitable for mountaineering, climbing and trekking. Ataalani is an ideal place to hike or camp.

Sulukle Lake, which has leeches on its surface and formed due to erosion by water (largely as a result of dissolving limestone), is located on the east side of the park. The lake is 600 meters long and numerous caves have developed where there was already instability in the lime base. Pasaini Cave is home to both hot springs shaped like themselves and other geothermal features.