Mor Kiryakus Monastery is an imposing three-story structure in Ayrancı Village of Beşiri District, Batman Province, Turkey. Mor Kiryakus Monastery has a rectangular shape from the outside and two large square plans from the inside—a closed courtyard and rooms behind each wing of the flying buttresses around it. 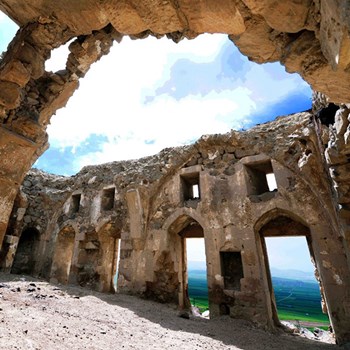 Missionary monks who came from Aleppo in the 4th century, converted people to Christianity, and baptized them-making it a tradition to establish monasteries on hills and rocks that dominate the Northern Mesopotamian Plain. One of the examples of these is Mor Kiryakus Monastery.

Mor Kiryakus Monastery is located in the sacred regions of Turabdin that are considered holy by Syriac Christians. The region has nearly 80 churches and the monastery is one of the first to be constructed paving the way for construction of newer monasteries.

The monastery initially built in 457 A.D., was only operational until 1940s and priests completing their training here received the title of "archpriest" and were assigned to other churches in Turabdin Region. Whilst people were not living nearby, all artifacts would be left at Mor Gabriel Monastery for preservation works which are still on-going.

In the Mor Kiryakus Monastery, most of which is in ruins, there are many adjacent rooms of different sizes.