Mor Gabriel Monastery (Deyrulumur Monastery ) is located 23 kilometers southeast of Midyat town of Mardin Province. The monastery was founded in 397 by Mor Shmu'el (Samuel) and his student Mor Shem'un (Simon). In tradition, Shem'un had a dream where an angel commanded him to build a house of prayer with three stones. When he awoke, he went to the spot and found one of the angels already placed it there. At this spot is where Mor Gabriel Monastery was built by them. 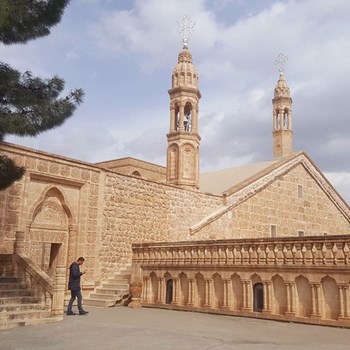 The monastery became a powerful location and by the 6th century had grown to have over 1000 monks. The monastery gained donations from even Roman emperors, such as Arcadius, Honorius, Theodosius II and Anastasius.

In the 7th century, locals changed the name of Monastery to Monastery of St. Gabriel who had lived in a nearby cave and was famous for his ascetic life. In the 14th century 440 monks were killed by Mongols in this monastery. In 1991, the remains of monks killed by Timur (Tamerlane) were found in caves underneath the monastery, dated to the year 1401.

Mor Gabriel Monastery is a monastery set in beautiful gardens and orchards. It was built to protect the Syriac Orthodox religion, while at the same time providing schooling for locals and ordaining new monks.