Mor Behnam Church (also known as the 40 Martyrs or Kirklar Church) is one of Mardin's most significant historical sites. The church was built in 569, and it commemorates Syriac Saint Behnam and his sister Saro. 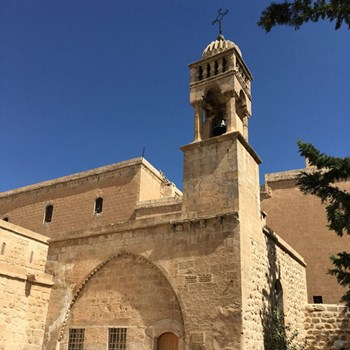 The planned main building is situated to the east of a large courtyard and has 12 pillars supporting arches. Looking closely you can see centuries old wooden gates with root-dyed curtains and a spacious courtyard which also contains bell tower houses and examples of lacework stonework. The whole site is strikingly picturesque.

The remains of 40 martyrs were brought here in 1170 and that's why it is called as Kirklar or Forty Martyrs Church. The church belongs to the Syriac Orthodox Church and functions as their metropolitan cathedral. It is open for prayer services or visiting when unlocked.

There is a large painting in this Church, with a width of 3 meters and length of 2 meters. The painting depicts the adventures faced by 40 martyrs. According to the story, great pressure was applied on Christians by Roman Emperor Dokios in the third century. When forty soldiers of Greek origin rebelled due to this pressure and were arrested for doing so, they were exiled and thrown into an ice pond in Sivas at midnight. At this point a bright light appeared over the water and they were rewarded with crowns. These soldiers, who froze to death in the morning, are broadly accepted as martyrs in the Christian world and churches and monasteries are sometimes built to memorialize them.