Milias Ancient City lies in the town of Kocaaliler, located within the Bucak town of Burdur province.The ancient city of Milias, which was inhabited during the Hellenistic and Roman periods, is surrounded by steep cliffs. There are walls where the cliff provides little protection for the city in times of crisis.

There is a small temple, which welcomes you first when entering the city center. There are buildings of many ruins in the environment with very damaged conditions. Most of these buildings were built by using bedrock for support. 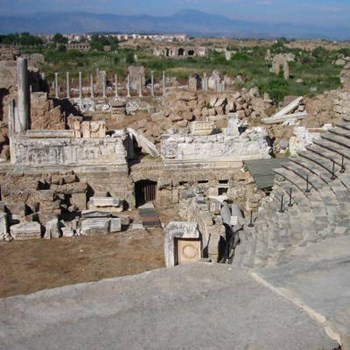 The theater of the Ancient City of Milias is among several buildings that are still intact. The landscape provides a perfect backdrop for this building. However, the stage building is not well preserved as many parts crumble and some have already fallen to rubble.

The public building located between the agora and the theater, which gives the impression that it is a stage building at first glance when viewed from one direction, is most solid structure in all of Milias. We have no information about its possible function as a market room or other such space; it may simply have been for meetings and larger gatherings.

You will notice the pillars with inscribed records in the completely collapsed agora, right in front of the public building. In addition to many damaged buildings in the city, one of structures whose functions can be understood is a number of cisterns found south from theater. The reason why you see so many water cisterns must be reconciled with lack of resources near by as supply.

There is a colossal staircase, perhaps a colossal entrance, to the west of the theatre. The architectural pieces around this building, whose height stature is significantly lower than the theater, confirms that there is another monumental structure in close proximity. Made up of steps descending from this monumental building towards the forest suggests that it’s a colossal entrance door.