Miletus played an important role in the history of western Anatolia as one of the 12 Ionian Cities of Asia Minor. The ruins located 30 kilometres south of Soke (Soke is a city and district) next to the Maeander (Buyuk Menderes) river are one of Turkey’s most attractive sites. Miletus was home to several great philosophers, scientists such as Thales, Anaximander, Anaximenes, Hippodamus, and Hecataeus.

Excavations conducted by the German archaeological team revealed that there was a Mycenaean settlement in the area dating back to 1500 BC. Some of fortification walls, houses and some remains of Minoan pottery were found in the area.

Miletus was first mentioned in some Hittite sources as Millawanda. The city had previously been inhabited by Carians and Lelegians, before the Greek occupation. According to famous Strabo, the Mediterranean city of Miletus was first founded by Neleus, son of Codrus and emigrated to the area from Athens. The locals at the time were displaced due to their land and belongings being taken. According to Herodotus, Greeks massacred all the men and took their women as their wives. 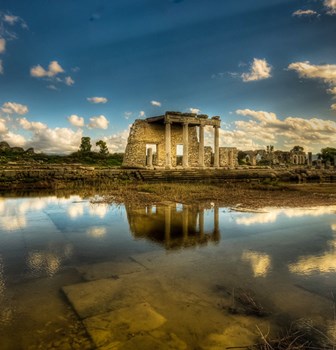 The location of Miletus was a major factor in its trade activity and the city's proximity to some important settlements such as Ephesus, Didyma led it to become one of the wealthiest out of 12 Ionian Cities (Ionian League) during the 7th and 6th centuries BC. Milesians established at least ninety colonies spread across a large geography as far as Egypt, the Black Sea, and the Marmara sea.

In the 6th century BC, all of the coastal Ionian cities in what is now West Turkey were conquered by Lydia. Miletus was an exception; they repelled the attacks of Gyges, Alyattes and Croesus. In 546 BC, the Persian army beat the Lydian king, Croesus. The capital city of Sardis was captured by Cyrus. After conquering Lydia and Sardis, Persians continued to invade Ionian city-states individually. The Ionian League (also called Panionic league) was unable to consolidate their power for a strong, united resistance. However, Miletus signed an agreement with the Persians and acquired special terms which gave them considerable freedom.

The period between 500 BC and 494 BC is characterized by the struggles of Ionian Cities against Persian rule. The result of this action was catastrophe and Miletus was severely punished by the Persians occupying the city and massacring most of the men, the rest was sent to Susa as prisoners. The temple of Apollo in Didyma was burnt down.

In 490 BC, Persian king Darius was defeated by the Athenians at Marathon. Ten years later, Xerxes became subject to Athens's warriors and armies after a heavy defeat in Salamis and Pegae. The Ionian cities set up an alliance under Athenian leadership--The Delian League --in order to resist any future invasions. Miletus is rebuilt and quickly restored to its previous prosperity and status.

In 334 BC, Miletus became a part of the Macedonian Empire under the leadership of Alexander the Great and in 133 BC, like many other Ionian cities such as Ephesus, Miletus became part of Romans. As soon as the Romans conquered Miletus they granted their new subjects with many privileges. Citizens of Miles, who still traded with other Greek city-states, even had the honor to be adorned by Roman emperors with many valuable monuments and buildings.

During the time of the Roman Empire, trade in Miletus benefited from ships coming to dock at its harbor. However, by the 4th century AD, so much sediment coming from the River Meander had built up that marine navigation became impossible. As the result of the silting in the area and the inevitable decline in trade, Miletus lost its wealth and population. For those who never left the city and found life difficult due to lack of resources, life became even worse.

Archaeological studies revealed the fact that Miletus, after being destroyed by Persians in 494 BC, was reconfigured according to the grid-iron style introduced by Hippodamus of Miletus. The techniques he used are found elsewhere as well, like in Priene, Ephesus and Rhodes. 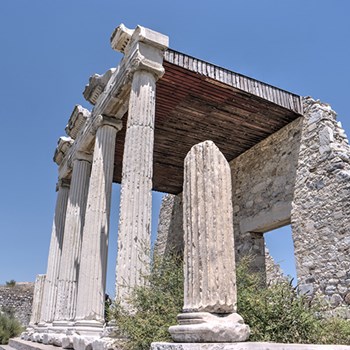 Greco-Roman Theatre : One of the oldest buildings in Miletus, dating back to 4th-century BC. During the Hellenistic period, with a theater capacity of 5000 spectators; it was modified and remodeled during Roman rule for up 15000 spectators. Many alterations were made to the cavea and orchestra many times especially when used for gladiatorial games. In parallel with the Roman style, the cavea is semi-circular and has a diameter of 140 meters. The vomitoria (vaulted passages) are all in perfect condition; inscriptions on some seats mention that "This was the place of goldsmiths of the Blues" or "the Blues" one inscription reads, which could be one of many differing political groups present in Byzantine society in Istanbul (Constantinople).

Heroon : The Hellenistic structure, or mausoleum, is made up of a courtyard and tomb in the center. To either side are several rooms that face East and West.

Nymphaeum : The monumental fountain was constructed during the Roman period (2nd century AD). In the back there is a two basins which were used to collect water from an aqueduct that came from 6 km away. Part of this water was distributed throughout the city using a network of pipes and channels. The three-story facade is flanked by colonnades and ornamented with vaulted niches, giving it a lot of detail. Some statues on the monument are in Istanbul Archaeological Museum and Pergamum museum in Berlin.

The Bouleuterion : Timarchus and Herakleides (2nd Century BC) built the building during the reign of Antiochus IV Epiphanes, who was a Seleucid King. The propylon leads into a colonnaded courtyard and the auditorium which is located in the back of the structure. The columns on the propylon are Corinthian and give access to a courtyard measuring 26 by 24 meters. A doric stoa stretches along three façades of the courtyard, where the remains of a Roman tomb stands. The total capacity of this building is 1500.

Delphinion : The largest and oldest shrine in Miletus dedicated to Apollo Delphinius. In ancient times, dolphins were considered as intelligent and music-loving animals. The Delphinion has a temenos measuring 50 by 60 meters and surrounded by a stoa which originally had an Doric style but was changed to Corinthian during the Roman period.