Mevlana MuseumPlaces to Visit in Konya 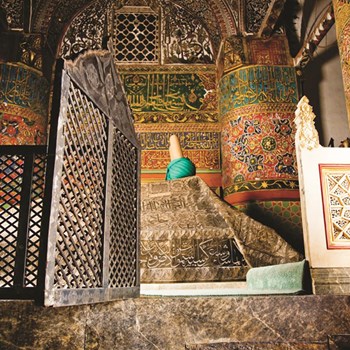 In the beginning, this exquisite complex was a rose garden in which dervishes resided. This is, as a present from Sultan Aladdin Keykubat to Sultânül-Ulemâ Bâhaeddin, the father of Mevlana, in the Seljuk period.

Afterwards, there was added the Mevlana Museum mainly including the graves of his father and other family members. Additionally, in 1926, it became a museum (today’s Mevlana Museum).

For Muslims, this is a very holy place where over 1.5 million people visit annually. Visitors are expected to observe the customary attire and respect visitors who are praying for Rumi's help by not interrupting their mediation. When you enter eyes must be downcast and shoes should have covers provided which no women should wear tops or shorts of any kind. The expansive museum covers approximately 18,000 square meters, and the magnificent mausoleum is named "Kubbe-i Hadra" (Green Dome in English). The four pillars that hold up this monumental dome are furnished with green tiles. It was built by the talented architect Bedrettin Tebrizi.