Mazı Underground City, which is located 10 kilometers east of Kaymaklı Underground City in Nevşehir and 18 kilometers south of Ürgüp, takes its name from the village where it was found. The underground city was discovered by chance by a shepherd and opened to visitors after some restoration in 1995. 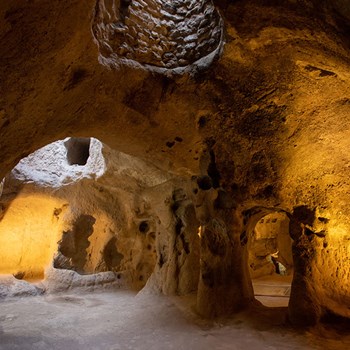 The ancient village has been preserved in a serene valley that is dotted with rock tombs from the Early Roman and Byzantine periods. It's likely that the underground city was founded at this same time, centuries ago.

The 8-story underground city had entrances from 4 different spots and was covered with sloping rocks with holes in the middle for lances to protect against enemies. The difference is that there are troughs carved into the rock and its width is wider than other barn examples at the entrance. This suggests that people were very good at animal husbandry back then . It is thought that about 6,000 people lived in Mazı Underground City at one time up to about 1 month long.

This underground city contains a 20-meter deep well, a grape house, a cellar, and other living spaces. However, it differs from others in its magnificence. Its church has a hidden chimney that leads to other sections of the cave system. Small stepholes are carved into the chimney for easy climbing. The vast size of this city combined with the quantity of tunnels makes it possibly as big as Derinkuyu or Kaymaklı. There are places thought to be used for bathroom facilities within this cave system too!