The Mardin Grand Mosque, which is from the Artuqid period and being the symbol of Mardin with its sliced dome and minaret, was built with two minarets originally according to the resources.

The minaret on which the inscription is located shows just the building's date as 1176, but this is not to imply that it has not been renovated since then. The minaret seen now is dating back to 1889. Some Assyrian authors claim that this mosque was converted from a church - either way, an old Christian site may have been here before it was built. 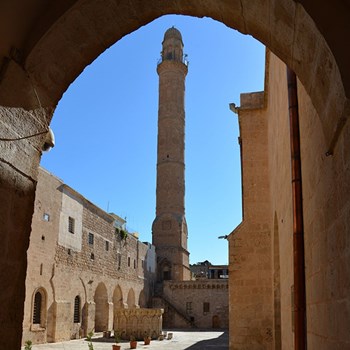 The building reflects the basic features of architecture during the Artuqid Period in 12th century. It is an important example of Mosque plan and form, coming into being in the 11th century with a structure that has an arch facing Mecca and off to one side.

The Mardin Grand Mosque was built with cut stone that was shaped using the external fluting technique. It is believed to be one of the first buildings in which this technique was used, and it became an important tradition in Mardin as a characteristic later period buildings during the Artuqid era. The mosque has a rectangular courtyard on its northern side.

On the south end of the courtyard, a set of three vaulted naves arranged parallel to the wall that make up a mihrab is seen. The models for this design were copied and used in many other buildings in its proximity.