The Maiden's Castle, also known as Kızkalesi, is a castle situated on an island of 15,000 square metres in Mersin Province. The castle covers the majority of this area.

On account of Strabo's writings, it is inferred that the island was a pirate haven in ancient times. The castle likely began as part of Alexios I Komnenos' work for the Byzantine Empire after the First Crusade, but its development is also attributed to Leo I and at least one subsequent monarch from the Armenian Kingdom of Cilicia. We know this because 1982 and 1987 archaeological digs found that an original Byzantine plan has been preserved primarily in its south wing with characteristic square towers. 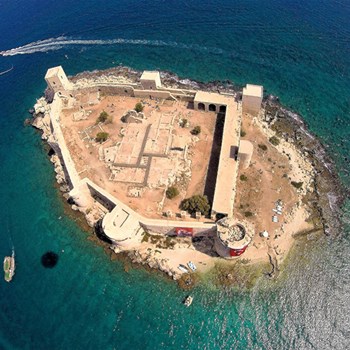 The Armenians rebuilt the north and west sides of the castle with their distinctive rusticated masonry, and also reconstructed parts of it with a barrel vaulted chapel on the inside. They had two inscriptions from 1206 by King Leo I and 1251 by King Het‛um about rebuilding this site.

The island was once connected to the mainland fort, Corycus Castle by a breakwater. The Armenians called this fortress Gorygos, but after the conquest by Ottomans, the island started to be called as Kizkalesi.

The island has a legend as well; according to the legend of Kızkalesi, a fortune teller informs the king that his beautiful daughter will be poisoned by a snake. Shocked by the news, the king tries to prevent her fate by building her castle on an island where no snakes live. He sends his daughter there, and so for many years she lives without problems until one day something goes wrong: A snake hides in a grape basket sent from the mainland and poisons princess. The legend of Kızkalesi is told with variations in other parts of Turkey.