Magnesia Ancient City (known as Magnesia Ad Meandrum) , located in Tekinköy near Ortaklar district of Aydin province in Northwestern Turkey is 100 km south of Izmir and has been a subject to ongoing excavations since 1984. Factors like its location on the side of the main road connecting Ortaklar to Söke and both cultural and natural heritage that makes it quite easy to visit.

The settlement was established in the Hellenistic era and expanded on an area of about 550 hectares. It is now a major archaeological site, meaning that it has been preserved for future generations to study how people lived there in ancient times. 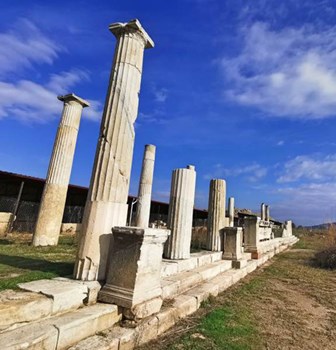 According to ancient sources, Magnesia was originally founded by settlers from Thessalia who came on the oracle of Apollo and led by their leader Leukippos. The first city of Magnesia is unknown, but it's said to be near the Meander River which used to be a bay on the Aegean Sea. As a result of relentless changes in the course of the Meander river and Persian invasions, the village was relocated to its current position next to Gumuscay River. During the Hellenistic period, Magnesia was ruled by Seleucos and then by the Kingdom of Pergamon. The city stood its ground during Roman rule until finally becoming a religious center under Byzantine rule.

Magnesia was a major city in the region of Asia Minor which held its strategic and commercial importance (Magnesia-on-the-Maeandrum) during its heydays. The city had a grid plan and was surrounded by a big wall, covering an area of 1.5 kilometers in diameter.The ruins in Magnesia were never completely destroyed as happened to many other ancient cities in the region, most of the ruins today are intact. This was because of flooding and sedimentation caused by the river, which covered whole city but protected it from treasure hunters for many centuries.

The first excavations in Magnesia started in 1891 and lasted for about two years. Objects discovered during the excavation are currently on display at museums throughout Paris, Berlin, and Istanbul. After a long period of silence from this first excavation, in 1984 the Ministry of Culture and the University of Ankara began excavations at Magnesia; dirt was put on top once more during the past years.

The most important ruin in Magnesia is the temple of Artemis, which was built by architect Hermogenes. This famous architect created the plan for 8-sided Greek temples known as octagonal pseudo-dipteros. The temple of Artemis was rebuilt in the Hellenistic period, around late 3rd century BC, on the ruins of an older structure from a previous era.

The temple is in Ionic style and has 8 x 15 columns covering an area of 67 x 40 meters (220 x 131 feet), making it one of the largest temples in Anatolia. It was apparently third after Didyma and Ephesus according to Strabo. The U-shaped huge altar was decorated with friezes and statues.

The theater of Magnesia dates back to 2nd century BC and has a classic shape. The Agora and Zeus altar was most likely built by Hermogenes around the beginning of the 2nd century BC. The agora covers an area of 26 thousand square meters (6,5 acres) and was one of the biggest bazaars in Asia Minor at that time. Other ruins that can be seen today in Magnesia are mostly from the Roman and Byzantine periods. These include gymnasion, bath complex, odeon, stadion with a capacity of 25 thousand spectators, basilica and the byzantine wall. The only Ottoman building at the site is Çerkez Musa mosque built in 15th century. Excavations are still going on at Magnesia and there are still lots to explore.