Little Hagia Sophia (Vize Hagia Sophia) Church is one of the church- mosque buildings found in different parts of our country. Little Hagia Sophia was built in basilica style during the reign of Emperor Justinian I, who reigned from 527 to 565 AD. Unlike many Byzantine building materials--stone and brick typically-the roof is out of wood. The church features rare architectural features not seen on later Byzantine buildings, as well pencil works and watercolor decorations belonging to the Ottoman period, which took place in 14th century. 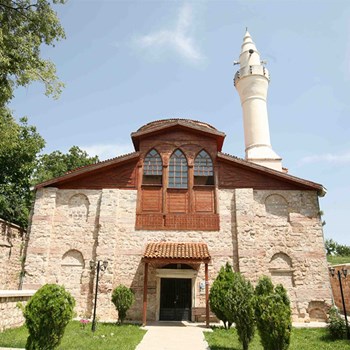 Vize Hagia Sophia (Holy Wisdom) is an important work in the history of Byzantine art. The building, which has an extraordinary architectural order created by using two different plan types, a basilica at the bottom and a Greek cross at the top, stands out as it is the only example near Constantinople.

Gazi Süleyman Pasha converted Vize Hagia Sophia into a mosque during the Ottoman Empire. Previously, the mosque served primarily as a prayer space. In 2007-2008, it underwent final restoration and today is mostly reserved for visiting purposes.

It is rectangular in shape and is close to a square. It has three apse which hold domes with hexagonal drums. The unique structure spans the columns holding the dome between them, as well as their marble-topped Corinthian pillars spreading out into three sections. More importantly, it looks like some of its characteristics are similar to Hagia Sophia. The main building was entered from the narthex and has three entrances, or doorways. It was once a place of broken inscriptions and statues of women, built partly of stone and brick. The mihrab (prayer niche) is a recent addition in cement.