The first mosque built in Erzurum during the Ottoman period, Lala Pasha Mosque also served as a model for other Ottoman mosques. The commander of Suleiman the Magnificent, conqueror of Cyprus, Grand vizier Lala Mustafa Pasha had it built during his time as governor in 1562.

A primary school and the palace mosque were located near Lala Pasha Mosque, which was built in Istanbul's "plan type" style. This is a design applied to other mosques such as Şehzadebaşı, Sultan Ahmet, Eminönü Yeni Mosque and Yeni Fatih (though on a much smaller scale). 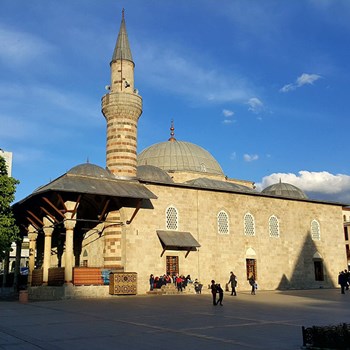 The mosque, with its four domes at the corners and 28 windows in two rows, is illuminated by light pouring through half cross vaults that are supported by pointed arches on all four sides. Tiles on window pediments in the lower row were damaged during occupation of the city by the Russians when their bullets fired through them.

The inscription of the building is located on the round and muqarnas mihrab. The hadiths on the windows offer unique examples of calligraphy. The minaret has a square base, a round body, and one balcony.

In the courtyard of the mosque, there is an octagonal fountain with a conical roof. The columns in this fountain are decorated with beautiful stone carvings. On the west altar in the narthex [mihrab] lies an edict written on shaped marble slabs which was written during Mehmed IV's reign and tells that residents became tax exempt when he brought peace to Istanbul after seizing power from his brother Ibrahim. The narthex has an architectural style characteristic of Ottoman architecture, open to all sides and fronted by pointed arches.