Lake Egirdir is located in Isparta Province, 180km north of Antalya. It is the fourth largest lake in Turkey and the second-largest freshwater body. The total size of the basin is 3,309 square kilometers, and it covers an area with a diameter of 482 square kilometers. Average depth measures 14 meters; altitude is 917 m above sea level.

The town was founded by the Hittites before falling to the Phrygians in around 1200 BC, and subsequently being conquered by the Lydians, Persians, and forces of Alexander the Great. The Romans called it Prostanna during their era. It acquired its name of Akrotiri meaning "peninsula" in Byzantine times, around 11th century AD, becoming a center for religious life during that period. Seljuk Turks conquered it around 1080 and later Hamidoğulları tribe made it a small principality until 1381. 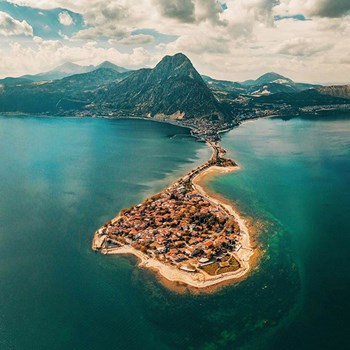 The Ottoman Empire took control of the city in 1417. Most of its population consisted of Orthodox Greeks until 1924 when they were exchanged for Muslims from Greece, which led to an Islamic majority.

Green Island: The island has a total area of 9 hectares and is still authentic with its rock-based wooden houses, narrow streets, and small fisherman shelters. Green Island, formerly known as Nis, is 1,5 km far from Eğirdir. Its boardinghouses and fish restaurants are the main attraction for visitors to this island. there is also Ayastefanos Church which can be visited on the island.

Can Island: The island, which is only 7000 square meters in size and located between Eğirdir and Green Island, was gifted to Mustafa Kemal Atatürk in 1933.

Hizirbey Mosque: Eğridir's largest mosque, Hizirbey Mosque was built in the 1327-1328 by Hızır Bey, burned down in 1814 and rebuilt. It re-opened for worship again in 1820 under leadership of Yılanlıoğlu Şheikh Ali Aga. The building is significant because of its large size and history, and notable for being unique on Earth due to the minaret situated at the front entrance arches.

Dündar Bey Madrasa: Dundar Bey Madrasa is opposite the Mosque of Hizir Bey Camii, formerly a caravanserai built by Seljuk Sultan in 1237, and later transformed into a madrasah in 1301 by Hamidoğlu Dündar Bey A two-story madrasa with a courtyard in the center has a big stone door on its outer edges. It was built during Seljuk's reign, which had geometric designs. The madrasa is no longer used for religious purposes and operates as a bazaar. One notable feature of the school is the walk through minaret which connects to the mosque.