Kuşkayası Road Monument is a roadside monument just outside the town of Amasra about 4km far from the center, in Bartin Province. It was erected during the Roman Imperial era. 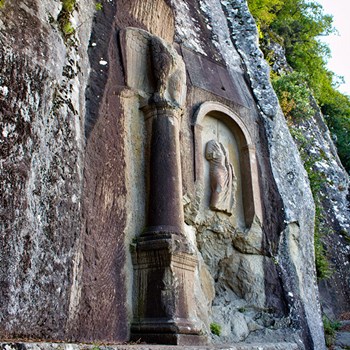 The "Kuşkayası" road monument is a unique structure in Turkey. It is the only example in Turkey. It was built by Gaius Julius Aquila, proconsul of Bithynia et Pontus, in honor of Roman Emperor Tiberius Claudius Germanicus (AD 41-54). The monument includes the figure of a now headless human and an inscription written in Latin and Greek.

The 260 cm (100 in) human figure may represent either the Emperor or the Governor, and there was also a fountain. The original monument has since been destroyed; however people can still see the statue at its present location today.

The inscription offers information in both Latin and Greek, as Latin isn't always enough when the original text no longer exist. It is in honor of Emperor Tiberius Claudius Germanicus who was a perpetual priest of the deified Augustus. Gaius Julius Aquila had twice served as prefectus fabrum (an executive for construction projects) during the consulships of Aulus Gabinius Secundus and Titus Statilius Taurus, and he pierced through mountains with his own wealth to build a road and recreation ground.