KusadasiPlaces to Visit in Aydin

Kusadasi is a beautiful seaside resort in Turkey. It's home to some of the world's best beaches, as well as ancient ruins that date back millennia. The city has been popular with tourists for decades and many people come here every year for their vacation. If you're looking for an affordable place to visit this summer, Kusadasi should be your first choice!

Kusadasi is 71km outside of Aydın. It includes a touristic center, including Ephesus, Virgin Mary’s house, Miletus, Didyma, Pamukkale and Bodrum. There are colorful entertainment venues near the water with camping areas as well as beaches surrounding nature. 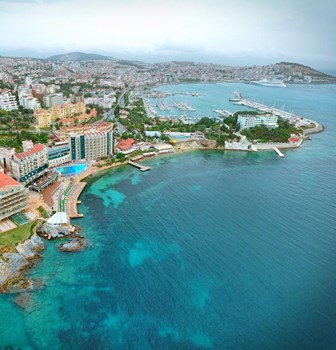 With its Çıban, Venus and Davutlar Thermal Springs; Aslanlı and Zeus Caves; Dilek Peninsula National Park and it's coves and spas within the park, Kuşadası welcomes many visitors in spring, summer and autumn every year.

Kuşadası consists of settlements that vary by age. At the foothill of Dilek Hill in northeast region, there are walls from Panionian (the meeting place for twelve Ionian countries), and the Parliament Building still remained to date. In this settlement you can visit to Venetian Castle and Anaia city.

Kuşadası's ancient settlements, including the Byzantine castle on Güvercin Island and the Castle of Küçük Ada, are among notable attractions. The walls surrounding Kuşadası were also built by the Ottoman Empire.

Kuşadası Marina is a welcoming spot for yachts and cruise ships, thanks to its marina and beautiful harbor. Welcoming tourism with its yacht harbor and two piers where cruise ships dock, Kuşadası is Turkey's second most important sea gate. There are ferries operating continuously at the port. Many cruises of various types await you in the port to take you on deep blue waters that offer relaxing surroundings as well as clear water.

Güvercinada Castle: The castle was built on a natural rock of stone and brick material and is located at the entrance to the port. Evliya Çelebi, a famous traveller of 17th century in Ottomans, visited Kuşadası in 1671, and wrote that 100,000 birds visit the Güvercinada Castle every year.