The town of Kurucaşile lies in Bartin Province in Black Sea Coast. It is a small town, and it is 52 km away from the center of Bartın City. The town is located in the Ancient Paphlagonia Region and was known historically as Kromna or Cromna. 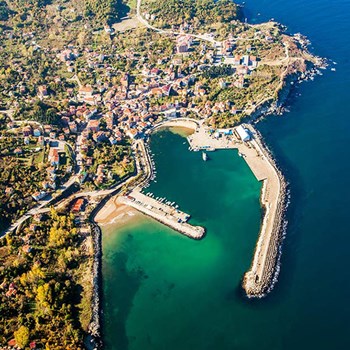 Kapısuyu Beach: Located in Kapısuyu Village, 3 km from Kurucaşile town centre, this beach is popular with people from the surrounding provinces and districts as well as the people of Kurucaşile. There are two pensions and a restaurant for those who want to stay at Kapısuyu beach which also has safe shallow sections for swimming.

Karaman Beach, located on the Bartın Kurucaşile road route and 45 kilometers from Bartın and 17 kilometers from the center of Kurucaşile, is one of the beaches where locals frequently swim in summer months due to its 200-meter sandy beach, being a village closest to sea shore with shallow water.

The two small beaches located in the harbor area are sufficient for those who want to swim, but in general the people of this district prefer to swim around the lighthouse.

Tekkeönü Beach: Located within the borders of Ovatekkeönü, it is one of the most popular beaches in summer due to its approximately 300 meters of natural shallow sandy beach.

Gölderesi Waterfall is located 18 kilometers away from Kurucaşile town center and can be reached by taking a 3 kilometer dirt road in the village of Kanat.

Combined with Kurucaşile and Cide Districts, Kapısu Stream forms the provincial border of Bartın and Kastamonu. While this stream is located near picnicking areas until the village Başköy, where there's plenty of opportunities to go fishing or play sports.