Kurşunlu MosquePlaces to Visit in Mugla

Kurşunlu Mosque is an Ottoman-era mosque in Menteşe. It was built upon the request of Esseyyid Şucaeddin Bey, one of the Menteşe lords, and has the characteristics of classical Ottaman architecture. The mosque used to serve as a madrasah with 30 classrooms but is now open for prayer since its congregation place was added by Şerif Efendi in 1900 with its' minaret. 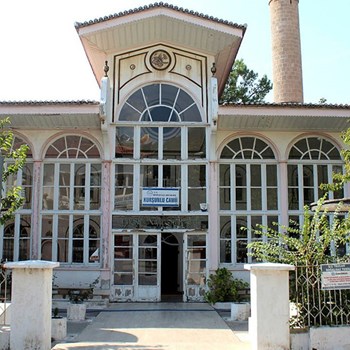 Travelers are often attracted to the Kurşunlu Mosque for its iconic dome covered in lead, a metal that has a history of 510 years and multiple uses. In many respects, this mosque has been restored through both time and preservation efforts; one interesting tidbit is that hand-drawn ornaments inside the building were processed using madder imported from Rhodes.

The Kaaba and sailing ship depicted in beautiful patterns on the walls also warrant admiration. Travelers eager to get acquainted with Seljuk & Ottoman architecture should not miss out on Kurşunlu Mosque which is also included in Evliya Çelebi's famous travelogue, a travel writer of 16th century in Ottoman Empire.