Kula Geo-Park and Fairy ChimneysPlaces to Visit in Manisa

Kula is an area of Turkey with the youngest volcanoes in its vicinity. In periods when active, these volcanoes left volcanic ash across the region and lava flowing from underground formed the land surface. There are blackened fields at many points around Kula. That's why for centuries Kula has been called as "Burnt Country". 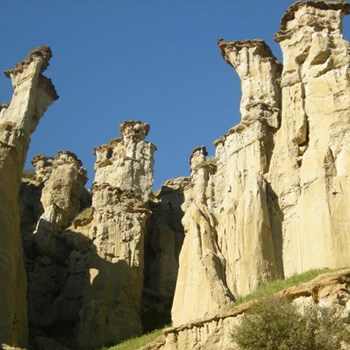 Kula's geopark is also Turkey's first and a UNESCO-recognized park. It is becoming popular among tourists worldwide.

The town of Kula in Turkey contains more than 80 volcanic cones, fairy chimneys, carstic caves, canyons, rock tombs, and rock bridges. In 2013 the Kula Volcanic Geo-park won recognition as one of the most prestigious geo parks at the 12th International European Geo-park Conference in Italy.

There are three main factors that created the Fairy chimneys in Kula Geopark: surface water erosion, splash erosion and tunnel erosion (piping). The typical cap rocks for the chimney-like formations either consist of hard cemented sandstones or basalt boulders. More often than not they lie on top of soft underlying permeable sandy-clay lacustrine Miocene sediments.