Kremna Ancient City is on a hill that overlooks the Kestros (Aksu) valley, in Burdur Province, within the borders of Çamlık Town.

The name of the city, which literally means "cliffs" in Ancient Greek, refers to its unusual rocky terrain more than 1200 meters high. The settlement is mentioned only a few times in historical sources, but inhabitants have lived there for centuries.

The Roman geographer Strabo states that Amyntas, the king of Galatia, once conquered Cremna. After his death, Romans took over the city and Emperor Augustus tried to pacify new province by building colonies of veterans in Kremna and many other places. 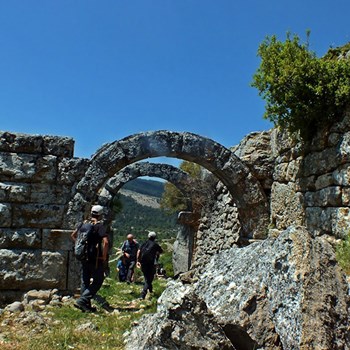 The city flourished in the second and third centuries AD, when many public buildings were erected. There is a basilica, two theatres, a public bathhouse which later converted into library and gallery. To supply these facilities with water an aqueduct was built built as well as some impressing mechanical devices.

Nothing of the pre-Roman settlement Kremna has been preserved, with only ruins from the Middle Imperial period and Late Antiquity. .

Historically, bandits made this region unsafe in 278 AD. When driven out by Roman troops, they fled to Kremna, where they were besieged and defeated by the Romans. Despite the victory at Kremna, the city never recovered from its losses due to the siege.

British researchers found plenty of clues to the siege at Kremna, including two siege walls, numerous projectiles and a bulwark of defenders. The forum, basilica, exedra, library theater and columned street are what all exist in Kremna.

Between 1971-1973, during the archaeological excavation in the ancient city of Kremna, 9 goddess statues (including Great and Little Athena, Leto, Hygia, Nemesis, a dressed woman) were found and placed in the Burdur Archeology Museum.

Kremna, which is covered by a dense vegetation and across from the past to the present, awaits nature lovers and researchers who will take refuge in its magnificent atmosphere.